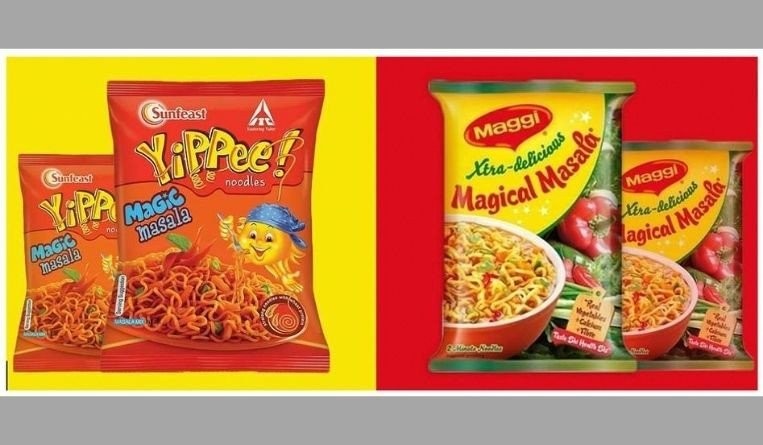 ITC claimed that Nestlé is trying to pass off its “Maggi xtra-delicious Magical Masala” as that of its “Sunfeast Yippee! Noodles Magic Masala” which is recognized as ‘Magic Masala’ by general public and traders. The Single Judge injuncted Nestlé from using ‘Magical Masala’ as an interim measure. In appeal filed by Nestlé, the appellate court directed for an expedited trial of the matter and appointed the Advocate Comissioner.

Nestlé claimed that ‘Magic’ and ‘Masala’ are laudatory and common to trade and ‘Magical Masala’ as well as ‘Magic Masala’ are merely a flavour descriptor and hence cannot be monopolized by any party. Nestlé also produced evidence which were ITC’s own documents showing that ITC never used Magic Masala as a trademark but as a flavour descriptor like other variants ‘Classic Masala’ and ‘Chinese Masala’ and that, in fact, Nestlé has used the word ‘Magic’ much prior in point of time in respect of food items. It was also claimed by Nestlé that there can be no passing off since the packaging of the competing products was completely different and both the products were used with respective trademarks, Sunfeast Yippee! and Maggi, which are sufficient to distinguish the products.

The court, after going into the pleadings and evidence of the parties and the witnesses, discarded the claims of ITC and observed that as per ITC’s own documents, ‘Magic Masala’ was never used as a trademark nor intended to be used so, and the fact that no trademark application was filed further fortifies the same. The evidence produced by ITC to show distinctiveness of ‘Magic Masala’ was also not found sufficient by the court. The court held that it would unfair to take a view that two common English and Indian words “Magic” and “Masala” respectively or when together which are common to the trade former being laudatory had become distinctive of plaintiff’s “Sunfeast Yippee! noodles” so much so that the expression “Magic Masala” had transcended itself to the status of a subbrand. Even in an ephemeral sense, the expression “Magic Masala” cannot be said to have became distinctive as it is common to the trade.

Infact, the court found that the mark ‘Magic’ was used by Nestlé prior in point of time for some of its food items though not instant noodles and that ‘Magic’ was common to the food industry. The adoption by Nestlé of ‘Magical Masala’ was thus held to be legitimate and the plaintiff ITC had used the expression “Magic Masala” in a laudatory manner to praise the “Masala” in the sachet. Laudatory epithets cannot be given monopoly or protection as has been held by courts. The court reiterated the law set down by various courts in saying that a proprietor who chooses words or artistic work which are not distinctive and are inherently weak or is incapable of protection, run the risk of such mark trampled or used by others.

The competing packaging of “Sunfeast Yippee! Noodles Magic Masala” and “Maggi xtra-delicious Magical Masala” were also compared by the court to come to the conclusion that there is no scope for concluding there could be any passing-off since the overall colour scheme, layout, style and overall get-up of the two products was completely different ruling out any possiblity of confusion. It was held that there was no visual or ocular similarity between the two wrappers and the competing brands viz., “Sunfeast Yippee!” of the plaintiff and “Maggi” of the defendant, are completely different.

The present judgment by the Single Judge of Madras High Court clarifies the law with respect to sub-brands used along with other well-known trademarks. While the court acknowledged that ‘Magic Masala’ and ‘Magical Masala’ were sub-brands respectively used by the plaintiff and the defendant, it held that neither of the sub-brands could have acquired the distinctiveness to distinguish one product from the other on the basis of the facts and circumstances of the present case. The court observed “The expression ‘Magic Masala’ and ‘Magical Masala’ are not adapted to distinguish the noodles sold either by the plaintiff or the defendant. They are adapted only to distinguish different flavours offered by them with the brand ‘Sunfeast Yippee!’”

A brand owner, therefore, while adopting the brands for their products, must be careful about the nature of the trademark they wish to adopt and the extent of right they wish to claim therein. While certain marks, even though descriptive can acquire secondary meaning, the same is possible only on account of extensive and exclusive use of the same which is often not possible. The court further reaffirmed this and held that even the law cannot come to the rescue of the brand owner if the mark adopted is inherently weak.