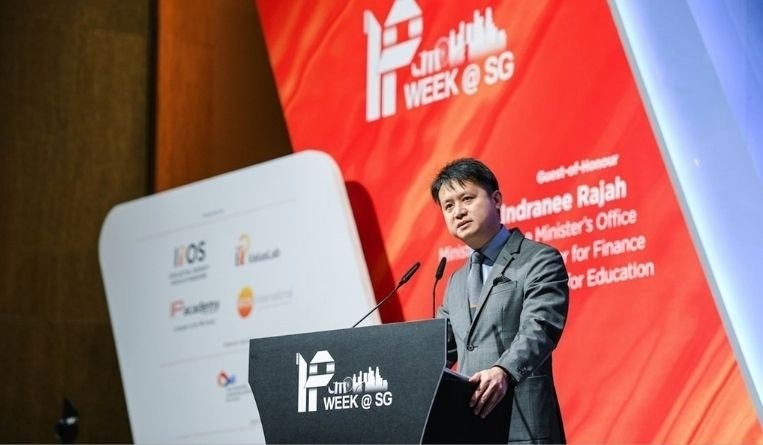 As IPOS chief executive Daren Tang prepares for his move to Geneva to lead WIPO, lawyers around Asia are singing his praises. Espie Angelica A. de Leon reports.

WIPO and the entire IP world are on the verge of a new chapter.

With the appointment of Singapore’s Daren Tang as the World Intellectual Property Organization’s next director general, stakes are high for Asia.

Tang, the current chief executive of the Intellectual Property Office of Singapore, is the first Asian to become WIPO director general. He will succeed Australian Francis Gurry at the helm of WIPO on October 1, 2020, at the conclusion of Gurry’s six-year term.

Under Tang’s leadership, IPOS has instituted groundbreaking improvements and innovations in Singapore’s IP system. According to the World Economic Forum’s Global Competitiveness Report 2019, the country is now second-best in the world and number one in Asia in terms of IP protection. This is just one of several accolades, thanks to programmes and innovations under Tang’s stewardship.

The past year alone saw the introduction of several technology-enabled tools and initiatives which helped transform IPOS into a truly innovative office.

Among these are the Enhanced Mediation Promotion Scheme (EMPS), a funding scheme to motivate parties to go for mediation for dispute resolution; IPOS Go, an AI-enabled app which is the first mobile trademark app in the world; and IPOS International.

Members of the IP sector in Singapore praise these initiatives.

“It is very heartening to see that there is funding support to encourage mediation to achieve a win-win solution for both parties. It helps strengthen the IP disputes framework in Singapore as parties are encouraged to find an amicable solution to their disputes,” says Esther Wee, IP counsel at Harry Elias Partnership in Singapore.

Financial, economic and timing costs of IP litigation could be an issue for enterprises, says Stephanie Leparmentier, regional IP advisor for Southeast Asia, National Institute of Industrial Property (INPI), in the regional economic department of the Embassy of France in Singapore. Hence, the EMPS is a welcome move.

“It makes sense,” she says. “Thanks to these funds, the businesses could be keen to try it and then use it more often.”

Leparmentier also welcomes IPOS Go as it makes IP accessible to more people, especially the younger generation, in a world that is getting more connected.

For Andy Leck, principal and head of IP at Baker McKenzie Wong & Leow in Singapore, IPOS Go is a game changer.

“From the get go – pardon the pun – I was impressed with how effortless IPOS has rendered the trademark registration process,” he says.

Wee says the app is particularly helpful for early startups and SMEs. The app helps them save on filing cost and makes sure they get minimal protection at the very least.

It also comes in handy for IP agents as they can do a quick trademark search and check on their filing statuses with just a few clicks on their mobile phone.

“The only downside is that applicants may not fully understand the scope of protection by filing different forms of the mark and therefore choose what forms of trademarks they should file for better protection and the chances of successfully overcoming a similar/identical mark, if any,” says Wee.

As for IPOS International, Leparmentier says that the INPI adopts the same approach as IPOS does.

“IPOS promotes ‘IP is not just about law’ and proposes services to businesses, thanks to IPOS International. At INPI, we feel close to this approach. We believe also that IP is not just law and it is necessary to educate businesses about this. An IP strategy adapted to the company's global strategy can prove to be a tremendous growth accelerator,” she explains.

She notes it is important, however, for businesses to not just have a better understanding of IP as an asset; they ought to be given the tools and support as well to access IP services as well.

With IPOS International, such tools and support are provided in a single hub.

“IPOS International has served as a bridge to close the gap between the government agencies, industry players and IP experts as it is a culmination of the following provision of services – IP strategy and management, patent search and analysis, and IP education and training,” says Wee. “It also offers great educational resources and a go-to point for businesses who want to grow their business using their IP assets as they can tap into the vast network that IPOS International has.”

In fact, for Kristian Robinson, managing director for Asia and director of patents for Asia Pacific at Spruson & Ferguson, the establishment of IPOS International is one of Daren Tang’s greatest achievements.

“I feel that IPOS International was one of his greatest achievements as chief executive, especially his role in developing and growing the team of local examiners in Singapore so quickly, and to such a high standard.

[It] provided a more robust system in Singapore,” says Robinson. “An important milestone was when IPOS-I was recognized as an International Searching Authority by WIPO, which shows that the quality and standard of the Singapore examiners had reached a global standard. This was an impressive feat considering the short time frame taken to establish the team.”

“As a practitioner, these efforts are particularly appreciated as they allow us to assist our client to protect their IP rights in the most cost-efficient way and create commercial value,” says Leck.

Leck also appreciates the fact that, under Tang’s leadership, IPOS reviews its internal processes regularly. This has improved the efficiency level of its various filing processes over the years.

Isabelle Tan, director of registry of trademarks at IPOS says a lot of factors contribute to the success of their office. The two that stand out are their people and their proximity to the industry.

“We work closely with our customers to understand their needs and create the relevant programmes for them. At the same time, we have people who are willing to push boundaries and introduce new components like integrating AI into IPOS Go,” says Tan. “It shows that small offices, too, can make a difference.”

Of course Daren Tang himself is a huge factor in these triumphs. Without him, there would have been no one to steer the office into new directions, including territories not commonly charted by government offices.

“He has shown that an IP office is not merely a government agency discharging bureaucratic functions,” says Leck, “but can also drive innovation and shape the IP landscape of a country.”

“Daren Tang probably has an approach closer to that of CEO of an innovative company than an official,” says Leparmentier, mentioning that he has a legal background and has worked within the state administration.

“IPOS was initially a usual and efficient IP office responsible for the registration and regulation of IP,” she says. “IPOS is now being transformed into an innovation agency that is contributing to Singapore’s economic development under its leadership.”

Just recently, IPOS launched SG Patent Fast Track, a pilot programme to accelerate the granting of patents in all fields of technology to just six months. The programme started on May 4, 2020.

Among the other initiatives established under Tang’s direction were the the pilot programs ASEAN Patent Examination Co-operation (ASPEC) Acceleration for Industry 4.0 Infrastructure and Manufacturing and the Patent Cooperation Treaty-ASPEC as well as the one-stop IP service platform IP2SG.

It is this same drive for innovation that they believe will also characterize his leadership at WIPO. Tang at the helm will surely set up its 93 member-states for more technologically robust IP regimes.

“These initiatives show that Daren is a reformer in the IP field and has helped Singapore achieve unprecedented efficiency and development in the field through such technologies,” says Gary Kuo, a partner at Winkler Partners in Taipei.

“As WIPO director general, Daren will bring the momentum for innovation to the supervision and protection of the IP rights in the Asia Pacific region through significant breakthroughs in the integration of transnational IP,” says Kuo.

Wee believes that whatever innovative ideas and insights Tang will bring with him to WIPO will impact Asia Pacific and the world.

“The Asia Pacific region is definitely an up-and-coming market,” says Wee. “More and more businesses are becoming aware of the importance of IP protection and enforcement hence having someone from the region who understands the challenges of the market would be beneficial in formulating policies that would help strengthen the IP regime and structure in the region.”

Leck hopes his appointment will shine a spotlight on Asia.

“Hopefully, with his experience in the ASEAN region and his call for a global ecosystem, during his term, he will be able to steer the ASEAN region towards building a common IP ecosystem,” he says. “This will serve to benefit the ASEAN member states and global investors, with more harmonization in the region.”

Meanwhile, Leparmentier expects Tang to be a bridge builder between the north and the south and between the east and the west.

“We hope that he will be a good keeper of a strong multilateralism at WIPO. As he understands the importance of IP and its impacts on innovation and global development, it should be very helpful to fulfill his missions in this challenging time that we are living,” she says.

Aside from his track record, dynamism, willingness to embrace technology and other outstanding abilities, Kuo says there is something else that makes him suitable for WIPO’s top post. And it doesn’t have anything to do directly with innovation.

“Daren is uniquely qualified for the position given his record of amicable and fruitful bilateral cooperation and relationship with the China National Intellectual Property Administration during his tenure as IPOS Director. Daren has played an important role as mediator in the context of the tense China-US relationship as China vied to be a leader in international patent applications under the PCT,” says Kuo.

“On behalf of the IPOS Board of Directors, we extend our heartiest congratulations to IPOS chief executive Daren Tang for being officially appointed as the next director general of the WIPO,” said Stanley Lai, who heads the IP practice at Allen & Gledhill in Singapore and serves as chair of the IPOS Board. “We are confident that he will bring the same vision orientation, energy, outcomes, and capabilities that have come to define him during his time at IPOS into the auspices of WIPO. Having worked with him for several years, the board is certain that the global IP community will be served by a director general who is exceptionally attuned to the interests of countries, economies, and also equipped with a deep understanding of IP and its forceful impact on innovation and global development, especially during these challenging times. These qualities will serve WIPO, her member states and the larger IP community well.”

As the region sings its praises for Daren Tang, the world will fix its eyes on him as he officially begins his duties at WIPO in October. His achievements as IPOS chief executive provides an indication of what is likely in store: technological breakthroughs, high-impact projects and more – reasons why he is widely praised in the region to begin with.