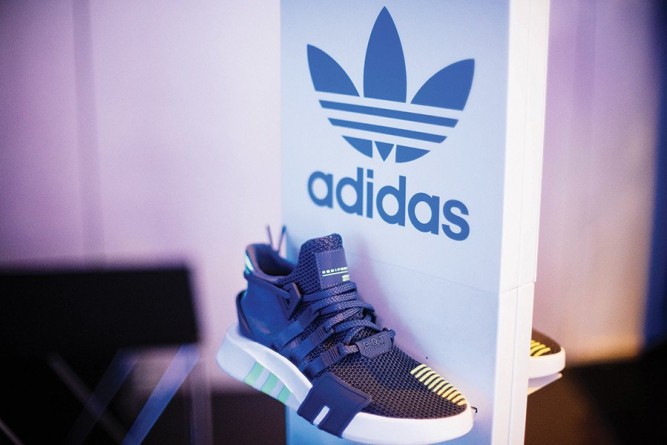 Taiwan-based Lutong Enterprise Corp. and Adidas International Marketing, competitors from different ends of the world, crossed swords over the use of their respective marks before the Intellectual Property Office of Singapore (Adidas International Marketing BV v. Lutong Enterprise Corp [2018] SGIPOS 12). Adidas is a household brand name that was founded in Germany in 1920 by Adolf Dassler. Adidas primarily deals with the manufacturing of sports apparel and equipment. Lutong is a company from Taiwan that was incorporated in 1979 dealing primarily with the sale and manufacture of clothes and footwear.

Lutong’s mark, designed in the early 1980s by students of the Chinese Cultural University in Taiwan, consists of a geometric device formed by three sloping stripes in the shape of an inverted triangle and a circle at the top left corner of the triangle, presenting the idea of a person poised to make a jump. It can also be interpreted to represent a shuttlecock.

On the other hand, Adidas’ mark was designed in 1990 and is made up of three sloping stripes conveying the image of a mountain.

Ground of Opposition under Section (8)(2)(b): Adidas’ arguments were premised on their allegation that both the marks are essentially triangles formed by three sloping stripes and that the addition of a circle and the inverted representation of the triangle is too minor to differentiate the overall similarity between the marks. Furthermore, Adidas claimed that its mark is highly distinctive and thereby should be accorded a higher threshold of protection against its imitators/competitors. In evaluating the allegations put forth by Adidas, the registrar adopted the well established “step-by-step” approach expounded by the Court of Appeal in Staywell Hospitality Group Pte Ltd v. Starwood Hotels & Resorts Worldwide Inc [2014] 1 SLR 911. In that regard, the tribunal systematically considered the similarity of the marks, the similarity of the goods or services and the likelihood of confusion arising from the two similarities. The registrar opined that the presence of the circle and the differently-oriented triangle visually alters the appearance and suffices to distinguish both marks. The registrar also rightly observed that Adidas’ mark is always used together with its brand name and that the device cannot be separated from the overriding impact of the word “adidas”. As opposed to Adidas’ arguments, the registrar concluded that Adidas’ mark in itself possesses a normal level of inherent distinctiveness thereby a normal threshold of protection against any competing marks. Furthermore, the registrar accepted the primary concept behind the origin of Lutong’s mark, the leaping movement, which goes hand in hand with the brand – “Jump”.

Upon considering the visual, aural and conceptual similarity, the registrar concluded that the competing marks are more dissimilar than similar.

Ground of Opposition under Section (8)(7)(a): In order to satisfy a claim under this section, Adidas’s needed to establish (1) goodwill, (2) misrepresentation and (3) damage. However due to the finding of dissimilarity as explained above, the arguments made in relation to passing off could not be established and the opposition under Section 8(7(a) failed.

Ground of Opposition under Section (7)(6): With regard to the allegation of bad faith, the registrar pointed out that Adidas’ pleaded case focused on Lutong’s espousal of its look-alike shoe designs and provided very little on the misappropriation of Adidas’ mark. Taking in to account the fact that Lutong’s mark was designed almost a decade before Adidas’ mark, the registrar found it difficult to conclude that the application was made in bad faith and determined that the opposition failed on all grounds.

Ramraj Maniraj began his legal career working in intellectual property firms in Chennai, as an associate partner and a legal associate. There, he honed his skills in filing trademark applications, drafting legal notices including oppositions, evidence in support of oppositions and applications, as well as attending hearings before the IPAB and the High Court at Madras, Tamil Nadu. After moving to Singapore, he worked as a legal executive in an insurance law firm. At Mirandah Asia, he manages the portfolios of trademark clients from a wide variety of sectors, assisting them with the prosecution and protection of their brands in all ten ASEAN countries and India.