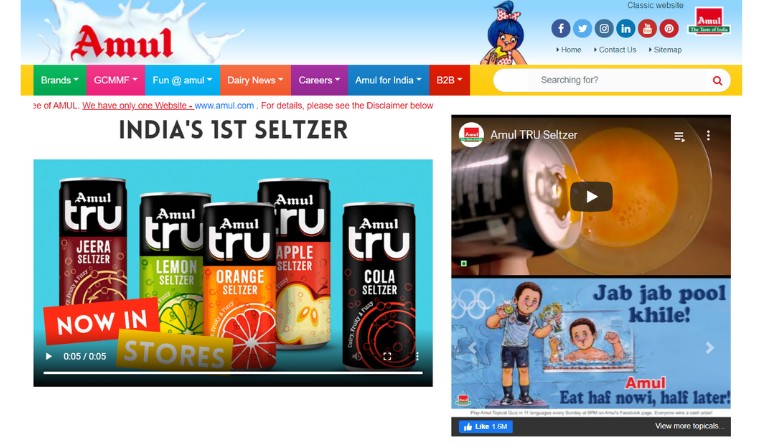 The Federal Court of Canada ruled in favor of Amul, a famous homegrown dairy brand from India, in a trademark and copyright infringement case in the North American country.

The victory marked Amul’s first win in a trademark infringement case outside India. It was also the dairy company’s first time to file such case against a company in another country.

The Court also awarded Amul, the eighth largest milk processor in the world, with damages in the amount of CAD32,733 (US$26,049).

The Kaira District Cooperative Milk Producers Union Limited and the Gujarat Cooperative Milk Marketing Federation (GCMMF), which markets the Amul brand, filed a case against Amul Canada after discovering in January 2020 that the latter copied the “Amul” trademark and logo of "Amul - The Taste of India."

The trademark and logo were used in a fake LinkedIn page of Amul Canada.

According to Amul’s counsels, Amul Canada and its four employees included in the suit, are neither licensed nor allowed to use the former’s trademark and logo.

“Amul is considered as the pride of India. Its journey from a cooperative movement to becoming a well-known global brand began decades ago. It is no surprise then that Amul’s tagline is also ‘The Taste of India’ and hence, people associate Amul as being a national brand. Its little girl mascot has immensely added to the brand’s reputation with all the quirky topical commercials having social and political overtones,” said Safir Anand, senior partner and head of trademarks, contractual & commercial IP at Anand & Anand in Noida.

GCMMF has been exporting the flavoured milk Amul Kool, ice cream and dairy snacks to Canada for the past two years. Amul products are also being exported to the US, Australia, New Zealand, Japan, Hong Kong, Philippines, Thailand, Afghanistan, Sri Lanka, among others.

“Hence, it is not a surprise when violators tend to piggyback upon this repute/goodwill and it is very likely that there may be many more battles for such well-known brands like Amul to fight,” Anand added. “Thus, the increased globalization of trade has made the protection of famous and well-known marks even more crucial.”

“The fact that they pursued the infringer and took the matter to its logical end before the Canadian Courts is heartening to see,” said Aishwarya Menon, a partner at K&S Partners in Gurgaon. “This is a strategy all IP holders should follow if they are serious about protecting their IP.”

Aside from registering their trademarks locally and abroad via trademark offices in different countries or via the Madrid Protocol, there are many other ways by which homegrown brands in India can protect their IP and better enforce their IP rights.

In the case of Amul, Anand said the dairy company can file for well-known petitions in other countries, collect evidence pertaining to exports and appoint exporters if necessary to help stop counterfeiting.

“For a wholesome approach, it could perhaps also think of creating an innovative brand campaign to depict its journey, playing the national integrity card,” Anand added.

For IP right holders who may fall victim to imported grey-market goods, Anand proposed getting their famous trademarks registered with Customs.

Another strategy for trademark owners, said Menon, is to get others involved in due diligence, apart from the company’s IP department.

“For example, not just their IP team but even their sales and distribution team can be trained to keep an eye out for instances of misuse of their brand and copyright. Market surveys to spot infringements are usually very effective. Simple Internet searches also often turn up instances of infringements,” Menon explained.

Citing more measures, she said: “Secondly, in India and internationally, they can engage watch agencies who would monitor trademark journals to pick up any third-party identical or deceptive mark. Thirdly, cautionary notices can be published in leading newspapers to notify the public at large about the ownership of certain trademarks and that strict action would be taken against any misuse or misappropriation of the same.”