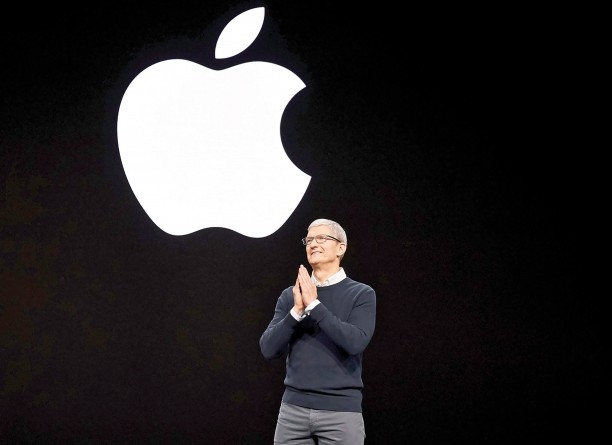 Apple CEO Tim Cook kicks off a March 2019 keynote event in Cupertino, California. The company has been battling Swatch in Australia over the phrase 'One More Thing', which the late Apple co-founder Steve Jobs popularized among Apple devotees, and which Cook used to introduce the Apple Watch in 2014 (Photo: Apple).

As their sales war rages on, Apple and Swiss watchmaker Swatch have also been waging legal battles.

The latest involves Apple’s famous phrase “One More Thing.” The late Apple co-founder Steve Jobs uttered the phrase in his “Stevenotes” from 1998-2011. “Stevenotes” were Jobs’ keynote speeches during the launchings of new Apple products like the Apple TV, iPod Mini, iPod Shuffle and MacBook Pro. Not only did Jobs utter the phrase, the words “One More Thing” were also shown in a slide presentation in the background as he delivered his speech.

Tim Cook followed in Jobs’ footsteps not just in terms of leading Apple but also by using the phrase himself during the launch of the Apple Watch in 2014. Again, the three words were shown on a screen during the launch presentation.

Enter Swatch. The company used the same phrase to unveil a new set of watches in Australia, where Apple had not registered the phrase as a trademark. In August 2015, the Swiss firm trademarked “One More Thing.”

Apple opposed this registration based on Sections 42(b), 58, 59, 60 and 62A of the Trade Marks Act 1995. At an Australian Trade Marks Office hearing, the company said that Swatch should not be allowed to use the phrase since it is associated with Steve Jobs.

In a client alert on Spruson & Ferguson’s website, senior associate Christina Linforth- Barker and principal Tim Allen from the firm’s Melbourne office wrote: “Whilst the phrase ‘One More Thing’ functioned as a ‘trademark’ of Jobs in the colloquial sense of being his signature phrase, the hearing officer found that Apple had not been using the phrase as a trademark, in the relevant sense, to distinguish its particular goods and services from those of other traders.”

According to the Sydney Morning Herald, the ruling reads “These words, used once before introducing a particular new product or service of the opponent [Apple], are then never used again in relation to that product or service.

“Patchy and temporary use does not have the character of indication of a trade source. Also weighing heavily against the opponent on this issue is this ordinary meaning that the phrase carries – simply that the speaker is about to say something else.”

Says Linforth-Barker: “If Apple had owned a prior Australian trade registration for ‘One More Thing’ in respect of similar goods or closely related services to the goods of the opposed application, it would have had a much better chance of success in the oppositions. The decision in respect of the opposition to Swatch [using] ‘One More Thing’ would still depend on whether that mark was considered deceptively similar to ‘One More Thing,’ although this would seem likely. In both cases, the outcome would also depend on whether Swatch could successfully have Apple’s prior registration removed (e.g. on the grounds of three years’ non-use or no intention to use in respect of its specified goods/services) or revoked/invalidated (e.g. on the grounds of lack of distinctiveness or no intention to use).”

Apple also failed to convince Richards that the use of the phrase had become familiar to a lot of people in Australia.

For Barker, whether “One More Thing” had become popular in Australia or not really did not matter.

“This would not have made a difference to the outcome in relation to the grounds of opposition under Sections 58 (ownership), 59 (intention to use) or 60 (reputation in a prior trademark) since Sections 58 and 60 depended on Apple being able to show use of the phrase ‘as a trademark’ whilst Section 59 related only to Swatch’s intended use,” she says.

“However, it could have improved the prospects under Section 42(b) – i.e., if it were established that the use of the marks by Swatch would constitute passing off or contravening Sections 18 or 29 of Schedule 2 to the Australian Consumer Law. It could have also improved the prospects under Section 62A (bad faith), although the hearing officer might have still determined that a significant prior reputation was not enough to establish “bad faith” without something more, e.g., evidence to show that Swatch only intended to use or register the marks for the purpose of harming Apple’s sales or trading off its reputation,” Barker explains.

Belinda Breakspear, a partner at McCullough Robertson in Brisbane, agrees.

“To be successful on the Section 60 ground, Apple would have needed to prove the phrase was used ‘as a trademark’ in ‘relation to goods,’ rather than a descriptive phrase used in its ordinary meaning to introduce a variety of things in a dramatic way,” says Breakspear. “So, even if the phrase was well known to Australians, this would not have made a difference to the Section 60 ground.”

Breakspear also agrees with Linforth-Barker regarding Apple’s opposition ground based on Section 42. “Accordingly, if the phrase was well known to Australians, a decision on this ground may have been slightly different as it is less reliant on the phrase being used as a trademark,” says Breakspear.

In October 2015, two months after the Swatch trademark filing, Apple finally filed a trademark application in Australia for its famous phrase under Classes 9 and 14. The application is currently under examination.